The whole IF interaction was based on this idea of an implicit communication with the developer that built the world (doing a poor work at it). What if instead we replaced this interaction with an explicit version of that? Here is where the notion of bug report arose. This was quite meta, as Sol moved away from France the week before starting the gamejam, and most of the communication happened through Discord. It is worth nothing that we were both playing Zachtronics games at the time, so that was most likely also a source of inspiration. 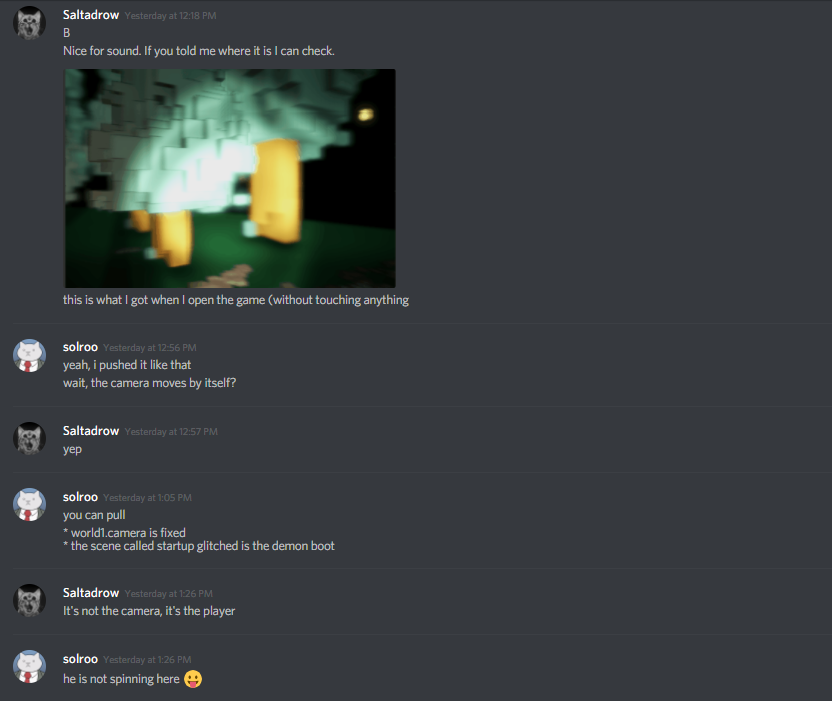 The reason we can write this post is because we have a day to day log of what was happening, thanks to Discord!

At this point, it was the beginning of the second weekend of the gamejam. It took almost 2 full days, but you could have email conversations! (the skeleton at least, it took some additional hours to have backs and forth). On the line of IF, you could compose bug reports by choosing subjects and problems. 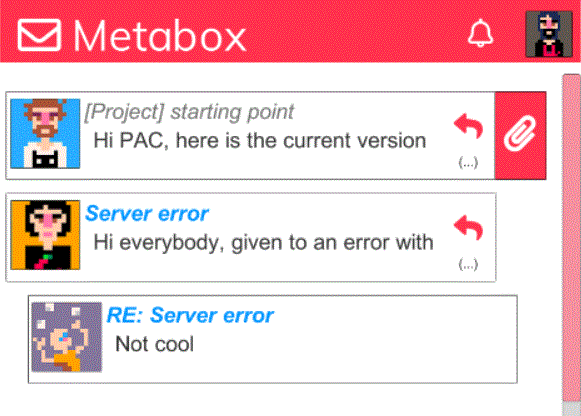 Getting and composing emails. The composing part got drastically reduced for the submitted version, sadly.

The question was then: which game are you debugging? The IF game was too complicated, but the level design was interesting on itself, so we reused the gameplay from the first person IF game, but moved to a simple fixed-camera.  Now, making the "in-ingame" was simple enough, but it looked.. crappy.

Weekend 2 (sunday night): juice it or lose it

We were watching Mark Brown videos while working, and then reached this gem: GAME FEEL, which it in term referred us to JUICE IT OR LOSE IT (genius stuff).

JUICE IT: we added a bunch of animations and post processing effects to highlight what was important (in retrospective, we overdid it with the post-processing). One of the main visual changes was the contextual information: now it took the form of dialog popups.

LOSE IT: What was originally a list of items in the IF version, reduced to a single item, and now we show it over the character (not the best solution, but it recycled the popup mechanics). 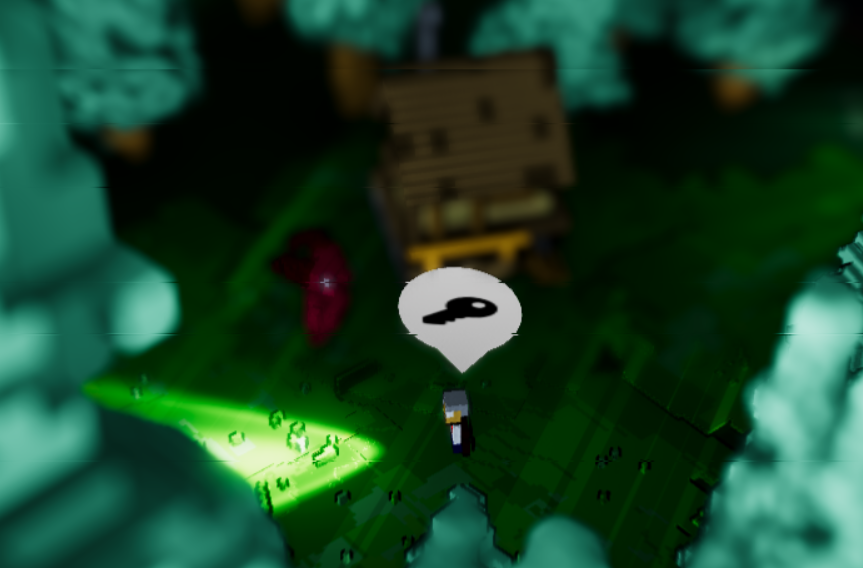 Look at this beauty!, and it only took a few hours in total (just some coroutines and transform interpolation). Being honest, the only reason we added camera rotation was because the popups rotated too...

The in-game crashed. We liked that. We had a progression of bugs that was taking the game from first draft to full game, and the player was debugging it (we had this idea more or less since the beginning). PAC wrote many bug cases, but handling the bug reports was too complex, and the creation of the conversation trees was hellish, so we had sadly to kill the baby again.

We scaled down to conditional answers and triggered emails... now the answers depended on : did you read the email? did you open the attachment? Additionally, you could get emails when reading, answering or executing the attachment of a given email.

We also removed pointless options to guide the player towards the right button (we just want the story to move forward for now). I really hope we can actually roll back to the full bug report system in the future... it felt like it was preserving the challenge of debugging, while also was very much in the spirit of IF... but was not feasible for a 2 week project.

As we had a first playable version, we really wanted to test it with people not involved in the process (i.e. not us) to avoid the “curse of knowledge” cognitive bias (see the amazing Celia Hodent book). We did three iterative playtests with three friends and colleagues, and it was really helpful. Things that were obvious for us (reply to a mail after a crash for instance), were not for them. Thanks to their feedbacks we could add some simple effects to draw attention to the important element of the game like making the reply arrow button grow and added a pop sound effects.

ONCE AGAIN, THIS HAS SPOILERS, JUST GO AND FINISH THE GAME, IT’S LIKE 10~15 MIN LONG

REWIND (In medias res - like): Now, we were developing 2 game modes (forest / emails), and these were totally asymmetric. In order to keep the players engaged, instead of building the game from scratch, we added a teaser of what the full forest game is about. Very much like Final Fantasy / Metroid style, we showed all the forest features, and then started from zero. Hopefully, the player would be intrigued how the forest story continues. We also trimmed and modified the sequence of bugs, trying to evenly distribute the forest scenes (as the emails weren’t very interactive anymore) . 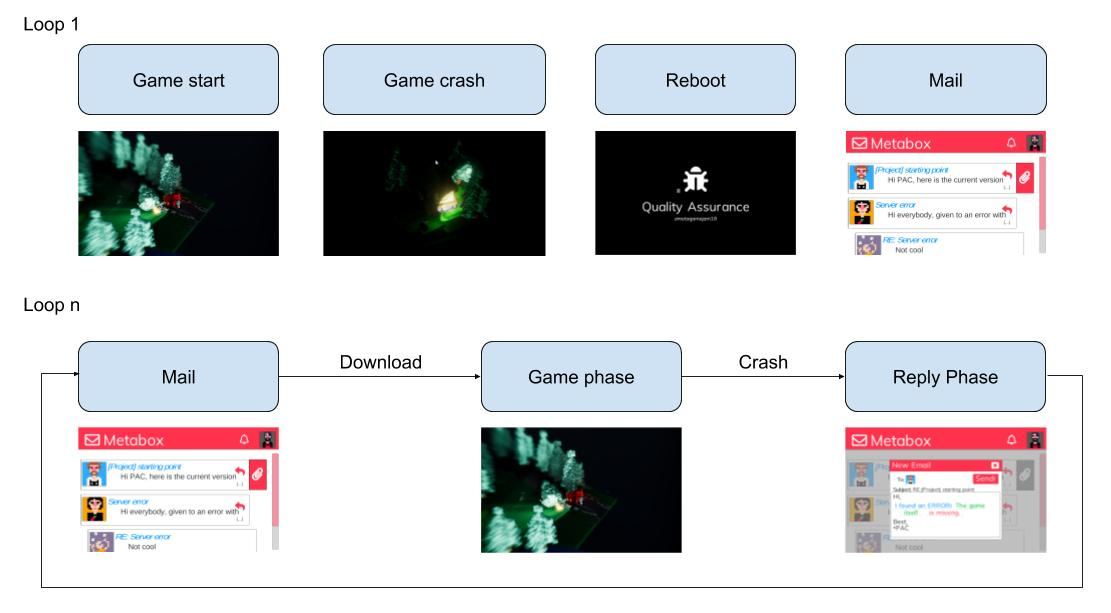 CRASH: the best way to do this rewind, was to do a full computer crash. We had a placeholder email saying “we lost all our previous emails”, just to keep the inbox empty. A full crash was also good narrative wise: you are building a game, but the computers crash, so you need to rebuild it.

HUNT: the cabin in the woods was clearly inspired by horror, and a Lovecraft narrative style was what we wanted to go for. We did some monsters in MagicaVoxel, but they did not look Lovercraftian enough, so we embraced a more demonic style (Cthulhu palette for the monster was changed from-greenish purple to  shader-glitch-pink). So, we had this monster standing around at the first scene, as a placeholder (quite Slenderman). “The game should crash after 15 seconds” implied you could walk more or less to the location where the demon was... so, perfect, the demon is the source of the crash. This was also quite in the line of the original story written by PAC, where the plot twist was "the player is the monster".

CAR CRASH: originally, the character in the forest was arriving to the location by a taxi (like in the first Alone in the dark). When we moved to the 3rd person, we added a car into the scene, but this was problematic as the player could just try to use it. So, we placed one of the trees on the road, and the car was crashed into it. It looked neat, and gave a nice excuse, plus a cool intro once we found the stock audio. In retrospective, it made a lot of sense: play, crash, repeat... wait...

THE OBVIOUS TWIST: The computer crashes, you crash.... Mmmhmm. This reminded us the original plan of you being part of the world you play (fourth wall in the office version of the game). So, perhaps the forest scene is the real one, and the QA experience is ... well hell, chasing bugs is hell... you are forced to do the same thing, over and over, until you crash.... The crash is the end and the beginning, and you will never go anywhere. If you did not get it by now, you died in the car crash (duh!).

LEAKING AND LOOPING: just to reinforce the revelation, the glitched world leaked onto the email client, the demon sends you an email with the final level, which takes you to the forest in first person view. You replay the game one last time... and everything loops again.

These images show how the final levels were supposed to look like, but we had to reduce the expectations to have it running by the submission time, becaaause...

When working remotely, internet is your ally, but it can also be your worst enemy. Sol’s internet stopped working the Thursday before the deadline, so all remaining communication was done through SMS between France and Germany. Also, everything was closed in Germany for Easter. Luckily, the office was still open (benefits of being an university employee), and could be used to push the game (with less than half an hour to the submission was closed).

The game got a very positive reception on the first few days. Most people liked it and found it funnny, even when the forest scene was a bit clunky and the controls too slow. This was more than we expected.

Then, things got even better: we got lucky and Alpha Beta Gamer wrote about the game https://www.alphabetagamer.com/quality-assurance-game-jam-build/ . This gave us a boost in views (50% of the views for the first few days,  40% of the total views as of today). Peach’s Castle also wrote about the game, in lengthy fashion https://peachscastle.com/games/simulator/mgj18-qa/ . Thank for both them we got a good visibility.

Finally, two streamers played the game (!!), with some interesting feedback.

Watch Checking out eight more cool games from the Meta Game Jam, and then Mega Man X4! Come hang out. :) from MrJoshuaMcLean on www.twitch.tv

Overall, people played the game (from start to finish!), and they seem to enjoy it. We think we should do an extended version at some point in the future, perhaps including some of those nice features we had to drop along the way.

That's it! If you reached this point, thank you for reading!