Entry for the MiniJam 50 : Islands, with the restriction of single level.

THEME: in this game, you take the role of Wilson, the renowed captain of the strawberry pirates. Your ship has broken during a storm (oh no!) and you and your crew need to fix it. For that, you will do daily excursions into the island, not only for wood to fix your ship but also food for your crew.

CONTROLS:
* Right arrow to move deeper into the island,
* Space key to use one of your crew members to collect resources,
* Left arrow to retreat for the day.

The game is definitely one of the best I've played out of this jam. Though, I do agree with the remarks made by Darenn Keller. Most of the men are needed to gather strawberries, meaning that you'll never take that much risk. If the strawberry yield is better (always two or more), I could focus more on exploration.

Nice game guys! Love the idea and had fun playing it! 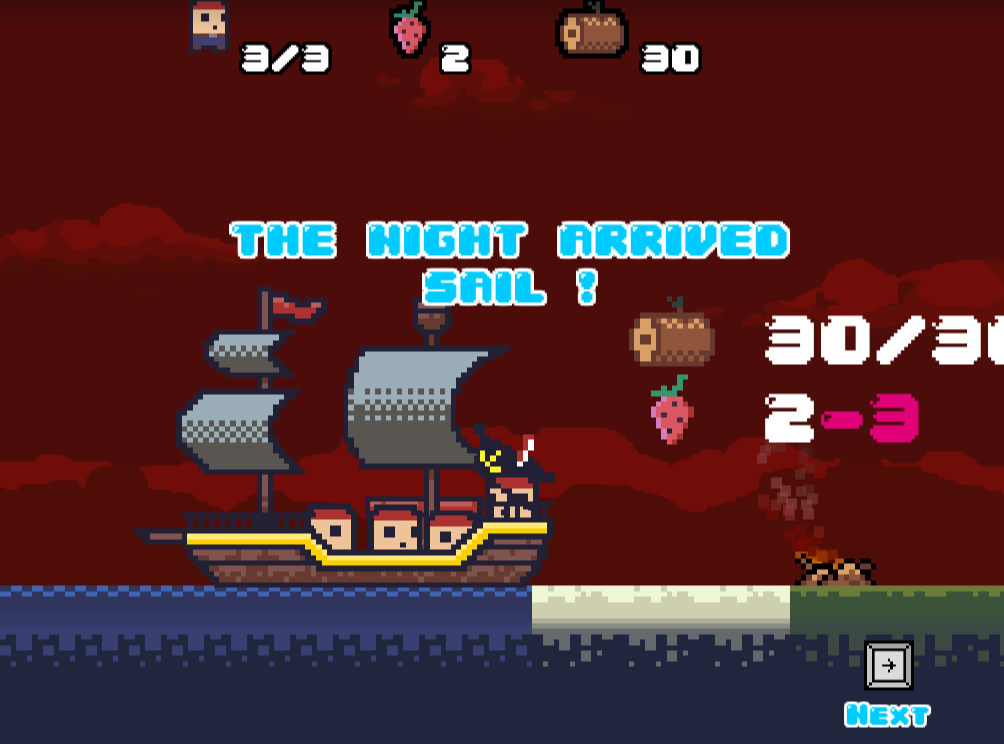 Some feedback :
- Add a day limit, to add a sense of rush and avoid having player taking no risks (spam food, then spam wood, etc).
- Add a feedback to know how much resources you can expect to get from the biome. This will make the players really want to take risks by going farther to get more resources (here I was just trying my luck every time) -> strategic choices.
- I like the idea of seeing the guys fight the monster, but in the end one of them is always hurt. Maybe sometimes no one is hurt? It creates suspense during the fight, and joy if the guy is not hurt. It won't change your probability system I think, you can certainly just add monsters that don't kill pirates in addition to the ones that kill pirates.
- Maybe the monster can only spawn in forests? This way players would be more inclined to move forward when it's not a forest? -> strategic choices And it will also creates suspense each time the player moves to a forest, contrasting with the safety of going to food.
- Maybe change the probability system? I've had a lot a trees (sometimes only trees) and one time 5 monsters in a row! (poor pirates). A proba that changes the more you move forward, and also changes with time.